The forced business shutdowns by the government have left the Rhode Island economy in tatters. Now, as we all struggle to recover, public-employee unions and socialist-left lawmakers are seeking to impose even higher taxes on us ... new gas taxes and a higher income tax. These are not burdens Ocean Staters can bear. Click here to say NO to higher gas taxes!

TCI = Gas Tax: Already with some of the highest energy costs in the nation, Rhode Island now wants to punish you for driving your vehicle by steadily increasing the price of gas by up to 38 cents per gallon. 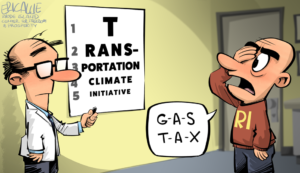 With virtually NO environmental benefit, and with gas prices skyrocketing across America because of President Biden’s assault on fuel, the extra money you pay for gas will fund wasteful pet projects of the extreme environmental left. Even the Sierra Club has withdrawn its support of TCI.

TCI = MONEY OUT OF OUR POCKETS = FEWER JOBS

A major study by the RI Center for Freedom & Prosperity found that the Transportation Climate Initiative (TCI), in 5 years will:

The worst time to raise taxes is during an economic crisis. Jobs and businesses will be destroyed, while your family will have less disposable income. The cancel-culture left wants to incite class warfare and advance their socialist agenda  … they don’t care about your business or family budget.

Steve Moore, renowned economist from the Heritage Foundation, explains why hiking INCOME TAXES will cause a “stampede” out of Rhode Island (click the image below): 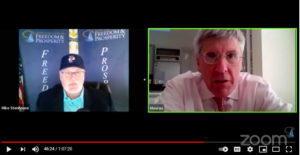 High taxes have long-plagued Rhode Island. Already with the worst business climate in America, Ocean Staters have continued their MASS EXODUS from our shores. 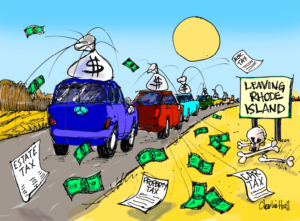 It’s time to tell legislators to stop with the high taxes!

We need Rhode Island to become a more welcoming place to raise a family and build a career…and maybe even raise sails on our own boat .

Now, your voice can be heard; you can take action to stop higher taxes in Rhode Island! Click below to learn more and to make your voice heard.
Click here to say NO to higher gas taxes!